UPC (Universal Product Code) is a retail barcode used to uniquely identify a product and its manufacturer. It is used at departmental stores and other POS in the USA , Australia, and United Kingdom.

When people speak of UPC barcodes, they are usually referring to the UPC-A or UPC-E barcode symbologies.

UPCA is a 12 digit code. The first six digits represent the number system character and the manufacturer of the labeled item, while the next five digits are a unique product identifier. The last digit is a check character that is derived from the previous 11 digits of data.

A typical UPCA barcode has center guard bars which divides the symbol into the left and right half. This division allows the symbol to be read in any orientation. 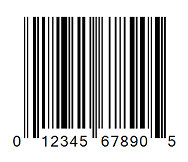 In the example above, 012345 refers to the number system and manufacterer, while 67890 is the product identifer. The digit 5 is the check digit.

UPC-E (also known as the "zero suppression version") is a variant of the UPC barcode used for small items. The symbol enables manufacturers to encode 12-digit product codes with just six digits. This is made possible by using an algorithm to convert the 12-digit value to its 6-digit equivalent.

Not all UPC-A values can be converted to UPC-E, but only those with several zeros in between.

Conversion of UPC-A barcode to UPC-E 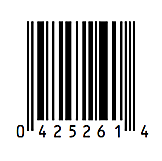 Back to barcode products